Improvisation is the practice of acting, dancing, singing, playing musical instruments, talking, creating art, problem solving, or reacting in the moment and in response to the stimulus of one's immediate environment and inner feelings.

Sometimes I move with grace and fluidity and other times like a dancing bear. With all the camera gear and throngs of people, shooting a horse race can be a challenge. It is an art form. You are constantly faced with obstacles and problems to get to your end goal of getting a few great shots out of a few hundred pictures. Acting quickly and going on gut instincts are part of the fun and terror of being a racing photographer. I decided to go to the Whitney because of Fort Larned. Seeing him win the 2012 Breeders’ Cup Classic at Santa Anita was exciting. 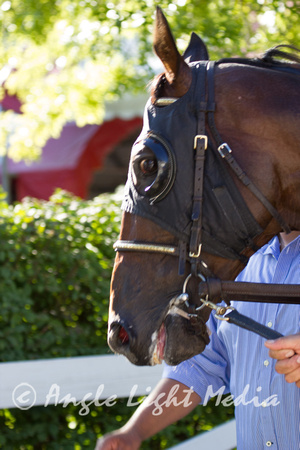 Early on the day of the Whitney, I stopped at Dunkin Donuts and drove to Saratoga full of anticipation for the day ahead. I planned to stop at the training track and take some photos of the new Whitney Viewing Stand. I am a race fan and avid bettor; I had to finish handicapping all races and finally bet all of the races before the day began. My mind was buzzing. It was cloudy early on with some sprinkles, so I packed some insurance and put a thick plastic bag in my back pocket in case I had to get my camera out of the rain.  The sky loomed with grey-bellied clouds, and they looked like trouble. Wonderful, something else to fret about.

After I parked my car trackside, I wandered over to the Oklahoma training track just off Union Ave. It’s a ramshackle conglomeration of old stables and a training track. The grooms, riders, maintenance workers, and security scuttled about doing their jobs before the big day. I dodged puddles and trudged up the muddy dirt road. The sky took a break and allowed some blue through, surrounded by clouds. Could it possibly clear up? My wife once told me when blue peeked through, the clouds would clear. She was a lifeguard for a long time so I found comfort in her words.

Saratoga Race Course was having its 150th birthday. They dedicated the Whitney Viewing Stand. This extraordinary viewing platform is built on the Oklahoma Training Track.  Newly built as a replica of judge’s stand at the Saratoga Race Track in 1892, it stood about three stories tall.  An ornate staircase lined with turned ball balusters ran up to and around the platform with benches. The hipped copper roof had exposed roof trusses underneath and a weather vane finial to top it off. Standing there was very peaceful as I watched horses running by rhythmically snorting and puffing in unison, their hooves clomping. The trudge over from the main track was worth it.

Saratoga is my favorite track in the country. There is an essence of history that mingles subtly with the trappings of modern day, a festive peacefulness. I love getting to the track early in the morning; you are free to wander as the workers prep for the race. The day before, I was tinkering with shooting in black and white. The effect added a touch of nostalgia that brought the images to life in the perfect way. It felt proper for the historic 150th birthday for Saratoga.

Just before race one, the sun shone and a breeze moved the clouds away. My wife was right. I positioned myself down on the fence of the paddock. I watched the paddock clock tick down to the first race as the sun beat on my dome. Slan Alhaile won the first race, I had a few bucks on his nose.  I proceeded to win the third with Diamond Maker, the forth with Quantity, the sixth with Gimme Credit, and the eighth with Tetradrachm.  My early bets paid off and I was up for the day.

The Whitney Handicap was finally here, the race was loaded with talent. Successful Dan, Mucho Macho Man, Fort Larned, Cross Traffic, Alpha, Ron the Greek, Csaba and Fast Falcon. I had to fight my way to the paddock. When I finally reached the paddock it was three people deep against the fence. Time for Plan B. I quickly moved back into the Clubhouse and went to the far West end. There was a little tiny piece of fence on the path to the track that I could potentially shoot from. I chatted with a father and daughter as they waited for the horses to stroll by. They told me for the past five years they had been coming to the Whitney and always lined up in that exact spot.

The crowd teemed with excitement. I got on my toes and looked north up the path and saw the bobbing heads of outriders approaching. I started to think how I would snap the Whitney horses as they passed by. The sun was in a frustratingly bad spot, and there were huge bushes and trees on either side of the path. My window to shoot was tiny, but it vanished when a guy with dreadlocks pushed in front of me with his racing program in my line of sight. Damn it. He stood for a moment and pulled back a little, and I had a clear view again.

The heads of the magnificent beasts emerged. I pulled up my camera and all of a sudden I heard a ruckus. Some people screamed and a dull groan rose like something was terribly wrong. Successful Dan spooked and had fallen on his back. He struggled to get back up on his feet. The path was narrow and he blocked all of it. His jockey Julien Leparoux, leapt off his back and gotten out of the way just in time. All in a matter of seconds they were right in front of me. I pulled up my camera, and just as I looked at Successful Dan’s face, he looked right back. I could see that he was terrified. He had foamed at the mouth and Julien was petting his neck and talking in a soothing way to calm him down. Two handlers held his reins did the same with grave looks on their faces. I didn’t snap the picture. Something told me it may have made matters worse. The poor beautiful animal, I felt awful. It shook me up a bit, and I didn’t really get any good shots with the exception of Cross Traffic coming out for the post parade.

The starting gate was almost in front of my seat, awesome. I clicked away. The horses just started to make their way to the gate. I noticed in the post parade that Cross Traffic looked very happy and pranced on his toes. J.R. Velasquez's bright yellow silks set a great contrast to his Horse, Cross Traffic. The horses coat was a blend of brown and grey which resulted in an interesting putty hue, a very unique color.

They finally loaded all of the horses and Tom Durkin came over the loud speaker:

“They’re off in the Whitney handicap”. 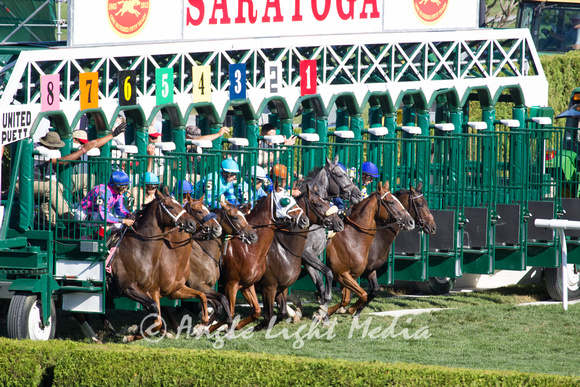 Race 9 Busting out of the Gate

At the half they had run a respectable 47 and 1/5.  Coming to the top of the stretch Fort Larned made his move and started gaining on Cross Traffic. Mucho Macho Man made a move as well, on the outside. I snapped pictures as fast as I could, dodging big posts in the Clubhouse Grandstand. At the top of the stretch, Fort Larned gave way and quickly faded. As the horses neared a small opening that offered the perfect shot of the race, everyone in front of me stood. Crap. I had to stand up too and refocus. Mucho Macho Man hung on
and Cross Traffic maintained his lead. Out of nowhere Successful Dan came rumbling down the stretch and got to the tail of Cross Traffic as he hit the wire. Cross Traffic wins wire to wire!

In reflection, sadly Fort Larned finished fifth. Successful Dan finished surprisingly well. He closed hard and got up for second. Maybe if he hadn't spooked in the path leading to post parade he could have won. If it were a longer race, he could have caught up. Cross Traffic ran a solid race. He expended a bunch of energy early on and got loose on the lead. Though he began to waver at the end, he managed to stave everyone off.

At the end of the race I reviewed my photographs. I was disappointed at first, when I realized that all the pictures were black and white. After I thought about it, I realized it fit. It bought me back over the 150 years that Saratoga has been racing at this gorgeous track. Improvisation is a big part of racing and race photography. You never know what’s going to transpire to until the horses hit the wire. 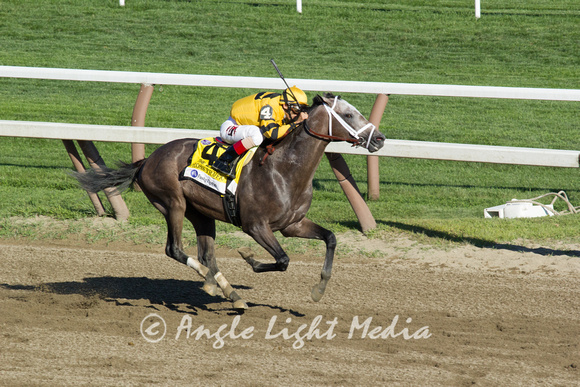