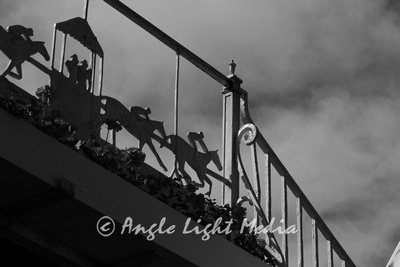 Rail on a Staircase leading to the Clubhouse Grandstands

The Travers is the biggest race of the summer. Triple Crown horses usually point towards this race. It’s also the oldest race in the country started in 1864. Historically it’s always a very interesting race and it is the graveyard of favorites.

After watching the Travers more than a few times this morning with my cup of coffee, a plate of bacon and some cheese curds, I realized a few things. I now understand why D. Wayne Lukas is a Hall a Fame Trainer and that I may have Obsessive Compulsive Disorder. I do obsess over things. It has always served me well, although my wife and sons may have another opinion. Why did Orb lose? What happened to Verrazano and Palace Malice? How did WILL TAKE CHARGE win? It’s all so clear to me after the race.

Orb had the lead at one point running down the home stretch, he was running pretty strong had the rail and saved ground most of the trip. The fractions where slow, 24.4, 48.8, 137.4 and 202.6 which worked against Orb. Plus he hung a bit tighter to the lead than he usually does. He had a new Jockey, Jose Lezcano a good jockey but he’s not Joel Rosario. Plus he’s had a sizable lay off. When asked about the race, I like Shug’s comment; “You can’t cry over spilled milk”. Something my dad will tell me when things didn’t go my way. Shug says they will point him toward something else. I think his effort was solid, just hanging on to third. I really liked Orb for this although my emotions may have gotten the best of me.

Verrazano broke well and had a little incident in trying to get outside. He hit traffic and was steadied on the front stretch. He eventually got in stalking position all the way around the track, typical trip for him. He just didn’t fire at the end. At the top of the stretch, he was a bit blocked, horses ran by him on the outside and then he faded quickly. I stick by my statement when you have a big effort like he did in the Haskell running 116 beyer speed figure winning by 9-3/4 lengths, your next race could be a challenge.

Palace Malice, hit the gate when he broke and almost fell to his knees. This put him in the back of the pack and he looked shook up. Slowly he picked off horses as they headed to the top of the stretch. He made a big move down the stretch and he almost got up for third.  Based on his lousy start, he had a fairly impressive rally at the end. If he had a clean start, I think he would have won.

Moreno ran tough, he sped up more than once in his stretch drive. He was game and held on grudgingly. I think they need to shorten him up to a mile or 7 Furlongs.

D. Wayne Lukas in taking with WILL TAKE CHARGE’s owner, he stated “They had to do a little with him”. They took off his blinkers and he put on some muscle mass after his Triple Crown bid.  Based on how WILL TAKE CHARGE ran in the Jim Dandy (second), D. Wayne switched jockeys from Junior Alvarado to Luis Saez. I watched the Jim Dandy video a couple times and he has some lumbering closing speed. One comment made by Luis Saez was “I watched the replays of the Jim Dandy and I knew how to ride him”.

He stayed a bit closer to the early speed with Orb switching between fourth and fifth place. He started his closing bid just in time lunging to nip Moreno by a nose. Luis is a twenty-one years old and this was his first Grade I win, someone to watch.

Palace Malice had a lousy start but, finished strong. Moreno ran tough as nails. Orb and Verrazano didn’t have enough at the end.