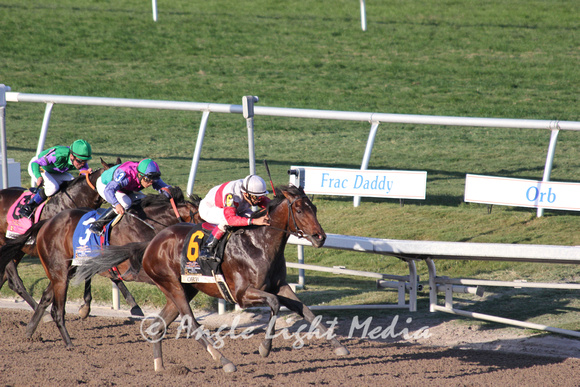 Orb Flying Down the Stretch FD13Orb comes down the home stretch in big loping strides passing Itsmyluckyday. He does this with relative ease.

Late Friday night I’m contemplating tomorrow’s race card at Belmont. With blurry eyes, I’m focusing my thoughts on the 95th running of the Jockey Club Gold Cup Invitational. Some great horses have won this race which started in 1919. The likes of War Admiral, Curlin, John Henry and Cigar all have landed in the Winner’s Circle in this prestigious race. Some would consider this to be a prep race for the 5 million dollar, Grade I, Breeder’s Cup Classic in early November.

Tomorrow’s horses are some of the most talented horses the past few years has to offer. We have Shug McCaughey’s 2013 Kentucky Derby winner hard closing Orb, The 2013 Belmont winner the Todd Pletcher trained beast Palace Malice, the front running Whitney Handicap winner Cross Traffic, the Woodward winner Alpha and Flat Out the winner of this race in 2011 & 2012 to name a few.

I think a number of horses could win it.

The way the race should set up is Alpha and the beautifully colored Cross Traffic will get out on the lead. Between the two, Cross Traffic will get on top. He ran really strong in the Whitney. If the fractions are not blistering John Velazquez will ease Cross Traffic along maybe even slow it down up to the half mile marker in the race. Palace Malice and Flat Out will get in stalking positions, maybe even try to press the early leaders. Palace Malice had gate troubles in the Travers. So if he is in stalking position he is a very dangerous horse. Flat Out won the Jockey Club Gold Cup in both 2011 and 2012 so he loves this track! So he is a force to consider here also.  Cross Traffic got wobbly in the Whitney at the end of the mile and a 1/8, I feel he will run out of gas in the end.

Now Orb will be just off all other leading horses maybe sitting in 5th or sixth. He has a new Jockey, J.J. Castellano, for this ride so I’m not sure what to expect with the switch. He can’t be too far off the lead because he will never catch the front runners. I think Shug will have him in better form for this race because he just missed in the Travers. I think it will be a duel between Orb and Palace Malice to the finish with Orb winning by a Length.

In final analysis I think it will be Orb, or Palace Malice, with Flat Out close by for third. Cross Traffic gets up for forth. Post time is 5:49 ET. Best of luck to all of the trainers, Jockeys and horses in the Jockey Club Gold Cup!