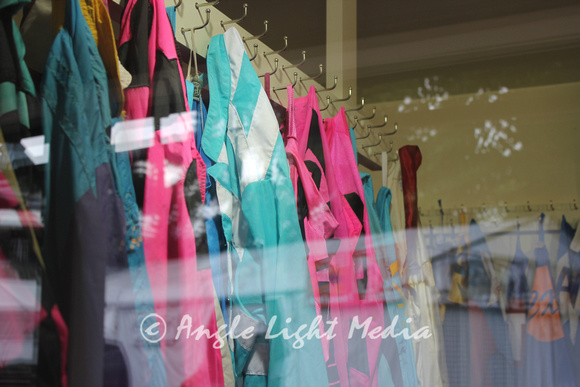 Flamingo pink with white stars, how crazy. It seems like an arbitrary combination, but in fact it has a very specific purpose and a heritage that dates back to the early dawn of horse racing. We all know and love the sight of the jockey silks. They're almost as fun as the huge hats of the Kentucky Derby, but very little is ever discussed about their origins and heritage.

The tradition of jockey silks was founded out of a necessity. Some of the earliest recorded horse races date back to the 1100s, and the first mention of silks is said to be around 1515 when Henry VIII was king. However it was later in the 17th and 18 centuries that it was more customary.

As racing became more and more popular, more horse owners threw their names in the proverbial hat. Around the mid to late 1700's there was a need for a way to differentiate between the horses for both the fans and officials. This change was fraught with troubles as well, because the jockeys often changed the colors they wore, further adding a layer of confusion. A meeting was finally held, and the Jockey Club made a decision that each of the registered jockeys would be held to one color for easier identification. In the beginning, the colors were all solid, with a black cap. It has even been said that some racers would use a family coat of arms to further differentiate between other racers. Now the patterns, images, and colors we see today are often carefully chosen so they appear unique from other owners.

While the silks are often referred to as "jockey silks" they seldom have to do with a particular jockey. The vast majority of silks are owned by a stable or a horse owner, and are registered in that organizations name. It is not unusual for a retiring owner to put their silk colors up for auction. Solid colored silks are some of the most sought after because there is often a long history associated with them and can go for a hefty sum.

Today, in The Jockey Club there are about 28,000 different registered silks, all unique from one another to represent each stable or owner. The silks are now made of synthetic material like nylon to make them more aerodynamic for the best racing performance. Additionally, each state's racing association may have different rules associated with the registration of silks, such as certain patterns or images.