Thinking about today's race it's a great field of horses. The consider the winner of the Belmont Stakes, Palace Malice. He has the great Trainer Todd Pletcher who trains some of the best horses in the country. He also has Mike Smith who seems to be a very patient even tempered rider and just a nice guy. His recent works are okay. His win in the Jim Dandy was respectable. He ran a career high beyer speed figure of 107. I'm not crazy about him coming back to that number. Verrazano ran a huge race in the Haskell, also ran the beyer of his life of 116. He seems tough to beat. The only race he lost was the Kentucky Derby. Todd Pletcher again is his trainer. I do like Verrazano. My pick for today is Orb. I had him in all three Triple Crown races and he seems rested and I love his workouts of late. If I didn't bet him and he won, I'd kick myself. He also has Shug, Jenn Patterson and Joel Rosario. I put him back on my home page because he's a strong contender. Third favorite for a Derby winner? Okay I'll take it. 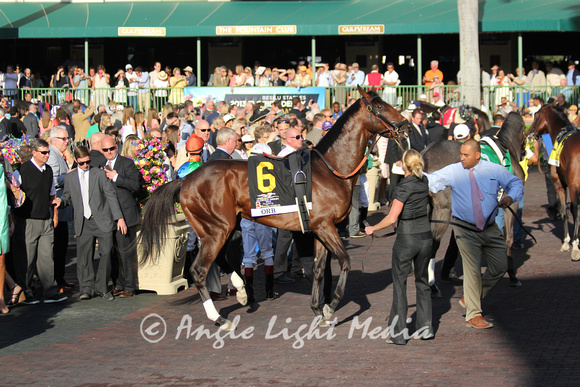 I think Moreno will be on the lead with Verrazano off his shoulder with Palace Malice right up close also. Once they start rounding the turn for home Verrazano will make his move. If the pace is slow he will have a great shot. If its fast it may set up nicely for Orb. He'll be flying at the end. I think Will Take Charge will be moving well at the end also.

I'd really like to see Orb win another! Good luck to him and all his supporters.