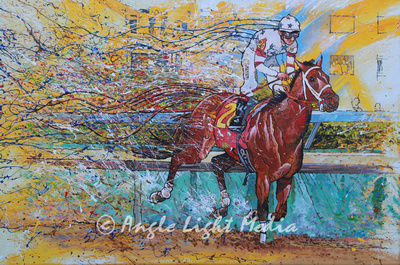 Angle Light Media was founded on the principle that the sport of Thoroughbred horse racing is more than just watching horses run, placing wagers, and keeping your fingers crossed. It is an art with a vibrant and rich culture that dates to the dawning years in American history and tradition. We at Angle Light want to capture that culture, and tell the stories behind the horses, jockeys, trainers, tracks and everything in between. There are soaring success, monumental failures, triumph and defeat. These are the ingredients for the great American story.

There are lots of photographers and journalists who recount the events in a way some might refer to as standard. We here do not settle for the standard, we want to share the stories of the stable master who has been around for 50 years, the inspiration for the horse columns at Saratoga, or the beginnings of the newest up and coming jockey. We want to be the angle that other journalists and photographers may miss, or overlook. We are the voice of Thoroughbred horse racing.

Often, there is a stereotype to the sport, that it's all old money, or that there is no appeal to the youth. We want to actively engage a new league of believers for the sport by offering and inviting young fans to share their stories, or experiences around their love of horse racing. It is one of our hopes that we can spread a positive message about the sport to people of all walks of life. We hope that hosting a podcast and blog, people can see us more as people than just a faceless company.

Everyone at Angle Light Media is an artist at heart or by virtue. We come from different places and have different specialties but we seek to provide only the best in artistic integrity when it comes to what we do. From photography to writing, to painting and design, we utilize our talents to give the something extraordinary for the world of Thoroughbred horse racing. We are art lovers first and foremost.

What's in a Name?

When we tell people the company name, they sometimes ask "what does Angle Light mean?" It's a fair question. To some it just sounds like some sort of trendy title that makes us sound cutting edge. It's a bit more than that however. There was a horse named Angle Light, and he was one of the few that ever beat Secretariat in the 1970's. Little more interesting now, I'd wager. There was very little said about him, standing in the huge shadow of Secretariat, but we here like the stories of horse racing, and thought we'd share our namesake.

Angle Light was the Sire of the formidable Quadrangle who spoiled the Triple Crown chances of Northern Dancer, when he won the Belmont Stakes in 1964. Angle Light was trained by Lucien Laurin who also happened to be Secretariat's trainer. That wasn't the only thing the two horses shared however, they were also stablemates.

Secretariat's legacy has not gone as a mystery, perhaps most recently a feature film was released in his namesake. What the movie missed is that Sham was not the only horse Secretariat grappled with, it was also Angle Light. The Wood Memorial Stakes at the Aqueduct track in Queens, New York was the scene of one of the biggest horse racing upsets in history. Sham and Secretariat, both considered to be Derby favorites, were beaten by the relatively unknown Angle Light. Angle Light came in by a head and Secretariat was behind the Sham by 4 lengths. This marked only the second time Secretariat had not come in first in his 12 race career at that point. This win also go Angle Light into that year's Kentucky Derby, but sadly he only finished 10th, and fell from the attention of the people.

So, then what does this have to do with a media company? It's a fair question, after all Angle Light the horse arguably had only one major victory. That's not really what we focus on, while Angle Light's time in the light was short, he has a hidden legacy. He was one of four horses to defeat the mighty Secretariat, a Triple Crown winner, and that is a great story for the ages. Angle Light Media's chief interest is to capture the stories around Thoroughbred Horse racing, no matter how famous or popular they are at any time in history. We enjoy looking into the books to find a powerful story, and maybe even bring it into the light so more people can appreciate it. Angle Light Media brings a new purpose to the quick horse that bested a Triple Crown winner years ago.