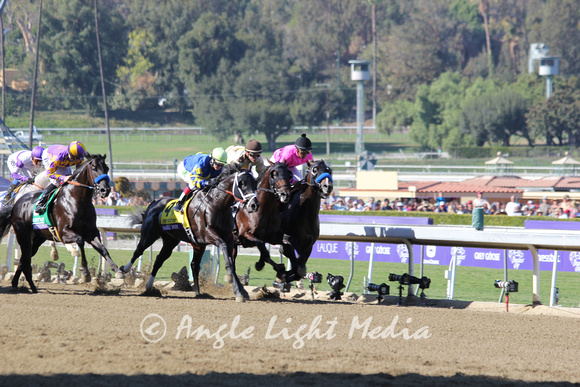 Just on the horizon is the new Thoroughbred season. Every year I have great anticipation for the Triple Crown racing season. What horses will emerge from literally hundreds of top thoroughbred horses? Who will be in that select group to run for the roses in Kentucky, then potentially the Triple Crown? It’s been a long time since we’ve seen a winner and some say it can’t be done again. I disagree, call it optimism but, I think we’ll see a couple more in my lifetime.

Two year old horses (Juveniles) will have a great race in the five hundred thousand dollar, 134th running of The Foxwoods Champagne at Belmont Park. These horses potentially getting ready for the 2014 Derby season next year and prepping for the Breeders Cup Juvenile race in November. The Derby season is a long way out, but I’m excited about the race today.

This race was first run in 1867. It didn’t run because of a ban on pari-mutuel wagering from 1910-1913. It was given the same name as the British Champagne Stakes which is run annually in Doncaster Racecourse in South Yorkshire, England. Notable past winners include; Seattle Slew, Alydar, Spectacular bid and Easy Goer.

In today's running of the Champagne, the first horse of note is Trainer Todd Pletcher’s front running horse Havana. He showed some grit in his first maiden race when being pressed for the lead. He was just shy of the Saratoga track record for 5-1/2 furlongs and his beyer speed figure was 102. Unbridled Song’s blood runs in his veins and has Irad Ortiz riding. I’m not crazy about the jockey switch from J.R Velazquez to Irad Ortiz. Havana’s stamina will be tested today stretching out to a mile.

The second horse I really like is Trainer Shug McGaughey’s Honor Code. He ran super strong in his maiden voyage. He broke dead last, it was muddy, but coming down the stretch he took an inside route and blew by everyone and won going away by four lengths. Most impressive. His barrel shaped chest looked like Charles Atlas’ when he kicked into gear. He made up twenty lengths in a very short killing burst of speed.

The third horse I like is the experienced Trainer D. Wayne Lukas’ Strong Mandate. He won the seven furlong Hopeful Stakes race by nine lengths. D. Wayne has been very hot of late winning the Preakness and the Travers, maybe a third? Strong Mandate is a versatile closer and he has won a Grade 1 race.

Lastly, I can’t forget about Trainer Nick Zito’s Grand Arrival. He has all-star jockey Rosie Napravnik. He looks like a fit here.

There are some young talented horses running today and to pick one will be tough. In my mind the race will play out like this; Havana will be on the lead, if he doesn’t break loose on the lead, Honor Code and Strong Mandate will be gunning for him from the 8th pole.

In final analysis I think it will be Honor Code, or Strong Mandate, with Havana close by for third. Post time is 5:46 ET. Best of luck to all of the trainers, Jockeys and horses in the 134th running of the Champagne at Belmont!