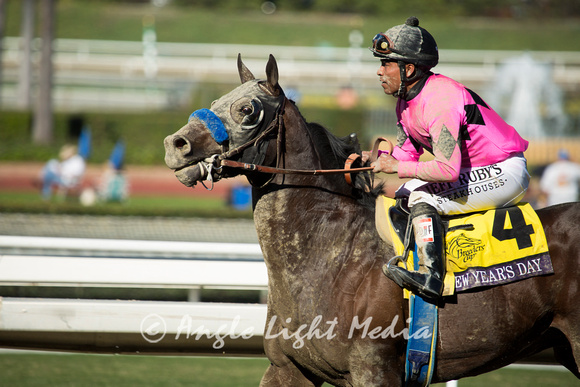 I was at this year’s Breeders Cup. Santa Anita Park is fast becoming one of my favorite tracks in the country. Just the sight of it is something to behold. It’s massive but has a feeling of intimacy. It’s glitzy as Hollywood, but not overstated. I can feel the ghost of Sea Biscuit and a sense of history on the grounds. If you have never been, I urge you to go. My trip this year was memorable. I was a winner and my best friend won big also. This added to the excitement.

As we wind through the Kentucky Derby Prep Season each race brings something new and maybe some consistency or horses that are running well. Who knows if they will ultimately make it to the Kentucky Derby and have a shot at the Triple Crown? Every year I look for that horse with something special. Some of the best trainer’s in the country always have a few horses they are pointing towards the Kentucky Derby. I waited until the eighth race for the potential Kentucky Derby contenders to run. Bob Baffert’s New Year’s Day was 10-1. He wasn’t talked about much until this race was in its final two furlongs.

Race 8 - The Breeders Cup Juvenile was an exciting race. At the break from the gate, Conquest Titan, Rum Point and Strong Mandate from the 14th hole got out in front. The fractions were quick, the ¼ mile went in 22.66, the ½ in 45.38, the ¾ in 109.70 then the mile slowed a bit to 136.66 and the finish was 143.52. New Year’s Day broke well out of the 4th hole and got to the rail to save ground early, held at eight place up the backstretch and slowly moved to fifth at the top of the stretch as Havana was getting by Strong Mandate to the lead. New Year’s Day didn’t get an announcer’s call until he burst to the lead (on the rail) half way down the home stretch. He was under strong urging by Martin Garcia, quickly animated and picked up the pace and passed Havana on the inside to win by ¾’s of a length.

In my final analysis, Strong Mandate burned too much energy early going from the 14 hole to the lead he was pretty wide (off the rail), he had nothing left in the end. Havana was wide into the first turn and burned a bunch of energy staying with the leaders and in the end (lugging out) was tired but, it didn’t seem like Gary Stevens wasn’t urging him along at the end. Maybe J.R. Velazquez would have rode the race differently. Havana has grit and is tough in the stretch. I do think the last minute Jockey change made a little difference. Tap it Rich (second favorite) broke poorly and had a hard time getting into contention.

Martin Garcia did an excellent job on New Year’s Day. He saved ground early and brought the horse to the lead very patiently and he was urging the heck out of him in the end and that made the difference in winning. New Year’s Day had the most effective trip and it paid dividends in the end.

A couple quotes from Blood Horse:

"My horse doesn't have that too much pace," Garcia said (about New Year’s Day). "I was exactly where I wanted to be. The rail was open and I took it; I didn't panic."

"I thought he ran super," said trainer Todd Pletcher of runner-up Havana. "He just came up a little tired in the very last part there. I'm really happy with the way he positioned himself. Gary said he got a little bit lost when he made the lead turning for home."

The Finish for the Breeders Cup Juvenile:

Chase for the Triple Crown - Standings

By: Howard Dinet CEO of Angle Light Media. Please listen to Chasing the Triple Crown Podcast #8 which talks about this race and more!